I am interested in behavioural and evolutionary ecology, especially how social networks affect the parasite transmission across populations, as well as the information content of animal communication systems.

Living in a group brings advantages for wild animals, such as protection from predators and accessibility of mating. However, group living entails the costs from conspecific competition and disease affection. The way how the social behaviour of individuals in wildlife populations affects the spread of pathogens and disease among populations is a vital question in population ecology.

In my PhD project, I explored the co-occurrence pattern of Enterobacteriaceae bacteria and their effect on the movement of sleepy lizards (Tiliqua rugosa). I also investigated the effect of parasitism on the physiological performance of garden skinks (Lampropholis guichenoti). Moreover, how sex composition can affect the outcome of parasite transmissions. This project aims to understand the parasite-host relationship and provide insight into disease transmission model.

The acoustic signal is an important way to build a social network in some species. My main topic for graduate study was the information content of the acoustic signal and its role in sexual selection. More specifically, I recorded the advertisement calls of two species of Microhyla, whose acoustic signals were very similar with highly overlapping distribution and mating season. This study was to investigate how these two frogs interacted in the chorus and most of all, what drove the acoustic signal variation. In the research of Japanese Buerger’s Frog, we found a cryptic species which was diverged in genetic, morphologic and behavioural aspects. We used acoustic signals as a tool to study how they react to different species.

I am also interested in the roles of colour and acoustic signals in sexual selection. I worked on the reproductive isolation between two sibling species of “grass lizards”, Takydromus viridipunctatus and T. luyeanus. I investigated the reinforcement in female choice and sexual character displacement in males at their contact zone. This project involved the field observation as well as laboratory experiments on manipulation of their colouration and female choice. I also try to include another species, T. stejnegeri, to further investigate the sexually dichromatic systems in this complex.

The introduction of exotic species has caused numerous damages to local ecosystems and even economy all over the world. Invasive animals are deleterious especially for island countries, including predation, competition, exotic pathogens. I sampled salamanders selling in the pet market to investigate whether they carry the Batrachochytrium salamandrivorans. Moreover, I traced their source of exportation and identify the species of these salamanders. 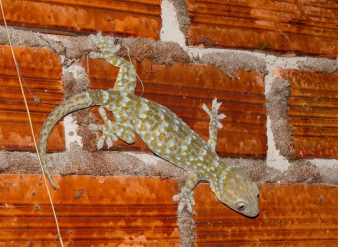 Although many invasive species have been reported in Taiwan, most invasions were not well documented. Besides the description of the newly invaded Gekko gecko, I wrote a checklist of invasive amphibian and reptiles in Taiwan, which could provide an important background knowledge for future research and conservation.